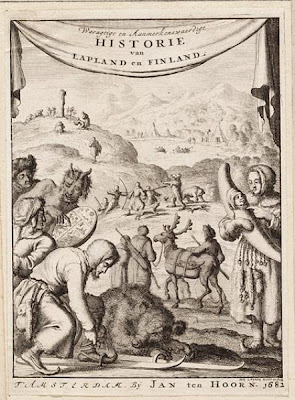 Dodsley's annual register sisältää vuoden 1759 kohdalla Suomea sivuavan tekstin, joka on otsikoitu An account of the hunting, oeconomy, and trade of the Laplanders; as also of the state of agriculture in the swedish colonies settled among that people. By M. de Juterbug. [Extracted from the Journal Oeconomique]. Samaa tekstiä löytyy myös toukokuussa 1753 ilmestyneestä lehdestä Magazine of Magazines.


But, whether, the Laplanders live upon flesh, or upon fish, cookery is among them such a noble office, that it is reserved as a right belonging to the master of a family, who sometime however resigns it to his servant. But the women never intermeddle in this domestic function: it is enough that they are allowed to take care of the children; they are not deemeed pure enough to prepare food for the men, or to touch those delicate messes which we have described.

The industry of the Laplanders not only supplies their necessary wants, but even their magnificence. They make very commodious canoes, so light that a man can carry one upon his back; and their sledges are entirely of their own manufacture, even those that are adorned with all sorts of figures in horn. Their neighbours buy of them little boxes, baskets; and their snuffboxes, ornamented with different figures, are known and in request through the whole north; but their master-pieces are magic drums, which heretofore they commonly used, and still use in private, for the purposes of divination. They make horn-spoons, and every man composes his own almanac, made of little bits of wood or horn, upon which are marked the days, weeks, and months. Nor do they need any assistance in making their moulds, and melting their pewter-plates. The women are very dextrous in making pewter-wire, with which they adorn the girdles and garments of the men, as well as the harness of the rein-deer; they can dress all sorts of skins, and shape them into all the different parts of dress.