The Finns at the market were not to be mistaken for Russians. Their features were wooden; their expression was far less intelligent than that of the Russians. The women were addicted to wonderful patterns in aprons and silver ornaments, and wore, under a white head kerchief, a stiff glazed white circlet which seemed to wear away their blond hair. These women arrived regularly every morning, before five o'clock, at the shops of the baker and the grocer opposite our windows. The shops opened at that hour, after having kept open until eleven o'clock at night, or later. After refreshing themselves with a roll and a bunch of young onions, of which the green tops appeared to be the most relished, the women made their town toilet by lowering the very much reefed skirt of their single garment, drawing on footless stockings, and donning shoes. At ten o'clock, or even earlier, they came back to fill the sacks of coarse white linen, borne over their shoulders, with necessaries for their households, purchased with the proceeds of their sales, and to reverse their toilet operations, preparatory to the long tramp homeward. I sometimes caught them buying articles which seemed extravagant luxuries, all things considered, such as raisins. One of their specialties was the sale of lilies of the valley, which grow wild in the Russian forests. Their peculiar little trot-trot, and the indescribable semi-tones and quarter-tones in which they cried, "Land-dy-y-y-shee!" were unmistakably Finnish at any distance. 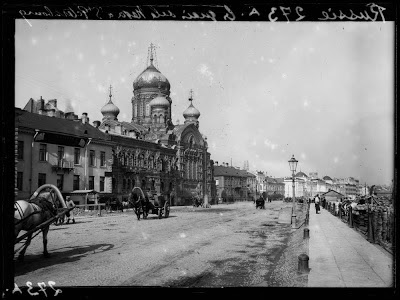