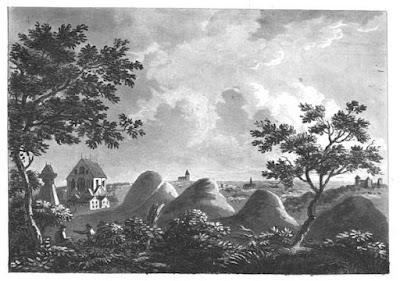 ... we proceeded to Upsal, and arrived there early in the evening. I intended to devote the following day to the survey of the colleges, public buildings, curiosities, paintings, and all those exhibitions of art and learning usually found in seminaries of knowledge and study. The Swedes had inspired me with such exalted ideas of this university, that I was only fearful left a single day might be far inadequate to such an undertaking, and wishen to have spent a longer time in so agreeable an occupation.

I am, however, at present most compleatly undeceived, and can assure you that Upsal has hardly one inducement to draw a man of taste to visit it, unless from being the residence of a Linnaeus. This Lycaeum of the north has not one piece of painting within it's walls, and only two of sculpture, which are busts of Gustavus Adolphus and Charles the XIth.

A gentleman who resides here, and who is son of the late archbishop of Upsal, did us the honor to be our Ciceroni, and to conduct us over the place. I enquired of him how many colleges there were, and which was the most celebrated. "Sir," said he, "we have three; but I cannot say that any one of them deserves your notice. The principal objects of attention are the library, the cathedral, and the botanical garden. I know not of any thing else."

The first of these is a neat good building, and there is a cabinet in it, at which for want of a better employment I spent an hour or two, while the librarian shewed me a number of little trinkets, rather than rarities, which are preserved with great care. Among these is the identical bag which Judas kept, one of the thirty pieces of silver money which he received for his perdify in delivering up his master, and a pair of red slippers in which the Virgin Mary paid a visit to her cousin Elizabeth. I must do the man the justice to say, that he blushed as he shewed them to me (Cursory Remarks Made on a Tour through Some of the Northern Parts of Europe, Particularly Copenhagen, Stockholm, and Petersburgh. 1775, s. 167-169)