an interesting visit of a young Polish exile who had fought under Kosciuszko at Maciejowice and who was now employed in a counting house around the corner from the boarding house. His last name was Bergudd (Birkut). In his memoirs Peter A. Grotjan described the visit as follows: "It was a witness to their first meeting, because we went together to Kosciuszko's quarters. It was truly affecting. The weather beaten hero, carved into a cripple on the field of battle, some of his wounds still unhealed, fervently embraced his youthful companion and affectionately and repeatedly kissed him. Both of them shed tears, and their sobs were audible." (Hearing before the subcommittee on parks and recreation of the committee on interior and insular affairs. United States Senate ninety-second congress second session on S. 1973 A bill to provide for the establishment of the Thaddeus Kosciuszko home national historic site in the state of Pennsylvania, and for other purposes.) 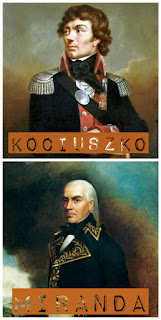 
The old proverb in regard to certain individuals is, that they are born with silver spoons in their mouths. Without any apparent effort, every thing appears to succeed in their hands. Life is to them, from beginning to end, a succession of Olympic games of feasting and enjoyment. I suppose there are commensurate drawbacks on this state of things; but they are out of sight.

Far different is the lot of another class in society, who, to preserve the figure of the proverb, enter life with wooden ladles instead of silver spoons in their mouths. Of this class was the unlucky individual with whom nothing succeeded, and who was finally led to the conclusion, that if he had been born a hatter, the Creator of all things would have constructed men without heads. Of this class was my friend Bergudd.

Charles F. Bergudd was a native of Poland — a country whose people are dissatisfied at home, and more unhappy still abroad. He was born too early and too late — too early for the last revolution — too late for the first. But he was born for revolutionary times. Of his history he never spoke, further than to say, that he could not breathe, for a single day, in any other atmosphere than that of a republic, and that “where liberty dwelt, there was his country.” So he came to America; and, it was in a country town in the West, not far from Pittsburgh, that I made his acquaintance. He then spoke French indifferently, German worse, and English execrably. Of all nations on earth, the Poles appear the least fitted to acquire foreign languages; English at any rate.

He had been endeavouring to get into business, first in Pittsburgh, and afterwards in the country; but all in vain. He had no genius for labour of any description; indeed, he had all our aboriginal Indian contempt for it. He felt himself fit for what he called better things. Perhaps, the poor progress he made when he assayed to learn some of the every-day employments, in which he found himself thrown into the shade by others, who were, intellectually, his inferiors, contributed to nourish this feeling. So, after months of well meant exertions of his friends, to tame him into civil life, he was given up as a hopeless case, and suffered to hunt, fish, and fill up his time as he saw fit. His manly feeling and good humour made him a general favourite.

After some time, as was natural, he got tired of these profitless pursuits. “I must get at something,” he remarked to me one day; “ this kind of life will never do. I have written to Miranda, who is now in New York, and I understand intends to make a dash at the Spanish Main, and offered myself to fill up his noble band of volunteers.” In due course of time, an answer came, which sufficed to decide Bergudd to set off. A few days devoted to leave-taking for his journey, found him ready; and, followed by the best wishes of his neighbours, his old associates, he departed.

I heard nothing of Bergudd, who had promised to write as soon as he had any thing to tell, for some weeks; and the first notice conveyed of his whereabouts, was a brief letter written soon after landing — of which I shall take the liberty to furnish an abstract.

The letter was dated at some obscure town on the Spanish Main, in the rear of Cumana.

After expressing his gratification at being on Terra Firma, he proceeded to draw a vivid picture of the enthusiasm with which all classes — the priests excepted — received their advancing detachment. Coro, an important town in the interior, was in an insurrectionary state. Varinas and Angostura were ripe to follow its example. Indeed, the whole country was receiving its liberators with open arms. Every thing he saw and heard was portrayed, as the French say, couleur de rose. A mighty Republic would be erected in Venezuela above all Greek, above all Roman fame; and the gallant spirits who were to carry the great enterprise into effect, would obtain a distinguished niche in the temple of history; their memories consecrated by the grati- tude and happiness of the future millions of this magnificent empire. The letter wound up as it had been commenced, in the most exulting spirit; and, the writer only regreted that I could not witness and participate in his triumphs.

Well knowing the sanguine spirit of my friend, and still looking on the adventure as a wild chimera, I was folding the letter to put it in my pocket-book, when I observed a line or two which was written across on the margin, with paler ink, and doubtless of a later date. I glanced them over and deciphered, “To-morrow, at 10 o’clock, I shall be hung, it's a hell of a business.”

Poor Bergudd! I read with melancholy interest the narrative of the final scene, which made its appearance in due time, in one of our Atlantic cities. He died as he had lived, firm and fearless, and living in the future. “ Miranda will soon be here, and settle all accounts with these scoundrels. O, Liberty! dear as the breath of life to me, I die thy willing martyr!” He then submitted to his sentence. I never saw a man who filled up in the living individual, so completely my idea of a hero. He should have died by the side of Kosciusko, when dragged to his dungeon, or Skrzynecki in the last hour of Poland’s death struggle for liberty,

While mute they watched till morning’s beam, Should rise and give them light to die.