Hague 25.3. (London Gazette 22.3.1718): "Letters from the North confirm the breaking off of the Treaty of Peace that had been set on foot between the Czar and the King of Sweden, upon the Latter's refusing to send his Plenipotentiaties to Abo, the Place which had been appointed for that Negotiation, from whence the Czar's Ministers were returned home, after they had waited some days to no Purpose for the Swedes. They add, that fis Czarish Majesty had thereupon directed his Troops to repossess themselves of some places in Finland, which they had quitted in order to facilitate an Accomodation; and had sent to the Duke of Meckelembourg, to let him know he was to expect no Assistance from Muscovy, his Majesty being unwilling to give any Jealousy to the Emperour and the Empire."

Hampuri 11.10. (London Gazette 11.10.1718): "By Letters that are since arrived from Norway we learn, that the Body of Swedes under General Ahrnfeld had found a Way through Jempterland, and was advanced within four Leagues of Drontheim. It is said the Design of the Swedes is upon Bergen, but besides that Aggerhuys is in their Way, 'tis doubted whether that Project can be executed without a Naval Force. [...] The Troops above-mentioned under General Ahrnfeld, had been employed about Stockholm and towards Finland, till they were ordered on this Expedition." 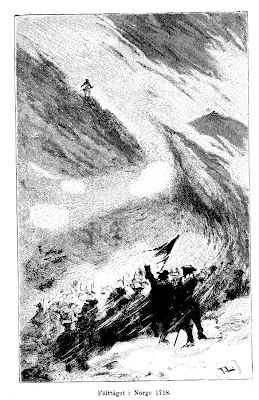