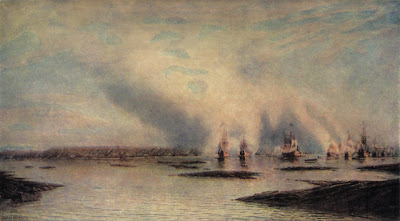 Yllä taiteilija Aleksey Bogolyubovin näkemys Hangon taistelusta (Wikimedia), joka taisteltiin juliaanisen kalenterin mukaan 27.7. ja gregoriaanisen 7.8.1714.
Hampuri 31.8. (London Gazette 28.8.1714): "Letters from Petersbourg of the 10th bring an account, that the Czar continued still with his Army in Finland, and it was thought he would engage in no Enterprize before the arrival of the Danish Squadron, which was expected every Day. Prince Menzikoff was gone to Notebourg, in order to visit the Fortifications of that Place. We have since received advice from Stockholm of the 18th, that an Express was arrived there from Vice Admiral Wattrang with an account, that the Muscovites, by the favour of a great Calm, had attack'd the Swedish Galleys on the Coast of Abo. The Engagement lasted several Hours with great Obstinacy, but at length the Swedes were obliged to give way to the superior Force of their Enemies. After this Action Three thousand Muscovites landed in Aland, and took Possession of that Island without Resistance, the Swedish Forces, which amounted to no more that Six hundred Men, being withdrawn before to save themselves from being made Prisoners of War."

Tukholma 18.8. (London Gazette 31.8.1714): "On the 11th an Express arrived here from the Fleet with an account, that the Muscovite Galleys, by the favour a Mist and a Calm, had suddenly advanced to the Isle of Aland, and were then in a close Engagement with those of Sweden. We have been since informed, that they Took and Sunk some of our Vessels, after which they Landed a considerable Body of Troops in Aland." 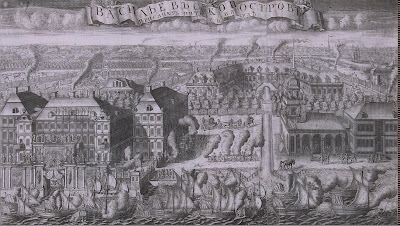