Hampuri 7.9. (London Gazette 1.9.1713): "Count Welling has received an Account from Stockholm, that General Arenfeld had gained an Advantage over the Muscovite Army, and obliged them to retire to Helsingfos; that they were making great Preparations in Sweden to fit out a Squadron of twelve Men of War, in order to engage the Czar's Fleet in Finland."

Varsova 4.9. (London Gazette 12.9.1713): "They write from Stockholm, that the People of that City were in a great Consternation upon a Report that the Army commanded by General Lubecker in Finland had been defeated by the Muscovites, and Sixty or Seventy of the Swedish Officers taken Prisoners."

Hampuri 15.9. (London Gazette 12.9.1713): "The admirality of Sweden has fitted out Twenty Gallies, to carry a Reinforcement of Troops to General Lubecker in Finland. Monsieur Live, who was named by the Senate to Command then, has refused to go, unless he is declared General in Chief." 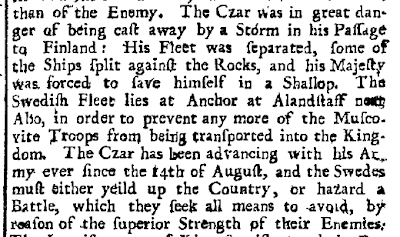 Berliini 23.9. (London Gazette 26.9.1713): "Letters from Elsingfos bring an account , that on the 11th past the Czar set sail from Cronslet with a Fleet consisting of fifty Vessels laden with Ammunition ond Provisions for the Use of the Muscovite Army in Finland. In their Passage they met with so violent a Storm, that twelve Ships ran a-ground, and the Czar apprehending the same Misfortune would happen to the Frigat he was in, Landed with great Difficulty and Danger in a small Boat. But the Storm being over, his Majesty went on board again the next Day, and on the 17th he arrived at Elsingfos, where he found his Troops in a very good Condition. It is said they amount to Eighteen thousand Foot and Five thousand Horse and Dragoons, all of which were to march towards Abo on the 26th of August. The Swedish Forces consist of no more than Nine thousand Men, who upon the approach of the Muscovites divided themselves, and the Infantry towards Tavasthuys, the Cavalry towards Abo. Their Fleet lies at Hangus, between the latter Place and Elsingfos."
Kirjoittanut Kaisa Kyläkoski klo 16:53