Pietari 23.1. (London Gazette 17.2.1719): "There is Advice, that a Swedish Captain of the Guards having been sent to Aland to sieze M. Stambke, Secretary to Baron Goertz, Stambke put himself under the Protection of M. Osterman, the second Muscovite Plenipotentiary, with whom he made his Escape to Finland; and 'tis said they are both of them safely arrived at Abo."

Pietari 29.5. (London Gazette 23.6.1719): "It is advised from Revel, that the Men of War which were fitted our there have been some time at Sea; that Part of them are employed to transport from thence to Abo in Finland three Regiments of Foot, designed to serve on board the Gullies which are there; and that the others cruise on all Merchant-Ships going to Sweden." 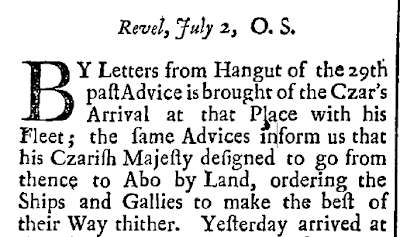