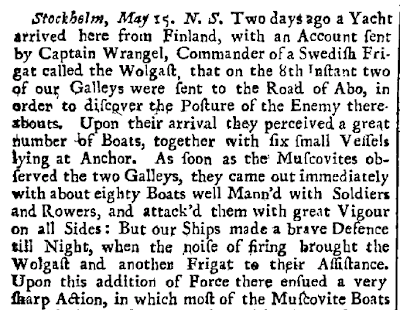 Dresden 8.6. (London Gazette 12.6.1714): "Letters from Petersbourg bring an account, that most of the Troops designed for the Expedition against Sweden, were already embark'd, and the Czar intended to set sail with them, his Majesty being resolved to command his Army in Person. The Muscovite Forces in Finland were advancing farther into the Country, and such Measures had been taken for their Subsistance, that it was believed they would be able to penetrate that way to Sweden, without meeting any great opposition, especially if the King of Denmark continues his Resolution of making a diversion on the Side of Scania."
Kirjoittanut Kaisa Kyläkoski klo 16:58