Hannover 8.8. (London Gazette 4.8.1713): "We have receiv'd advice from Petersburg, that the Czar was embarking Four thousand Horse, and as many Foot, in order to be transported to Finland, least the Sweden, having gather'd their Forces together, should be in a Condition to Attack the Muscovites in that Dutchy." 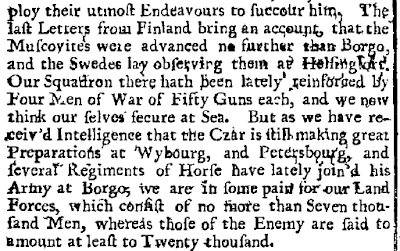 Samassa numerossa Varsovasta 26.7. tieto "We have recieved Advice from Petersbourg, that the Czar intended to set out from thence in a few Days with a considerable Number of Troops, in order to make an entire Conquest of Finland." 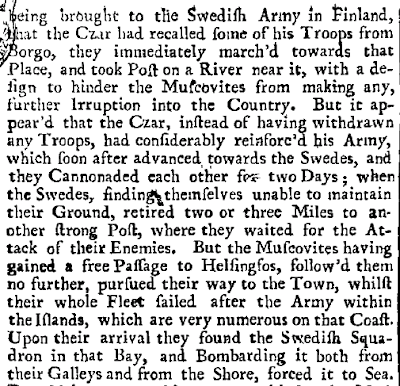 Varsovasta 16.8. (London Gazette 29.8.) "We have received Advice from Petersbourg, that the Czar had Ten Men of War in that Harbour, that he expected Two more from Revel, and after their arrival intended to give Battle to a Swedish Squadron lying on the Coasts of Finland."
Kirjoittanut Kaisa Kyläkoski klo 17:35