Pietari 6.8. (London Gazette 4.9.1714): "Letters from Revel bring an account, that the Czar was embarked on Borad a Man of War for Finland, where it is thought he is now arrived. His Majesty intends to stay there but a short time, and unless the Confederates make the Divertion they promised in Scania, it is very much doubted whether he will carry on the Designs he had formed against Sweden this Summer."

Wien 12.9. (London Gazette 14.9.1714): "Monsieur Matueof, the Czar's Plenipotentiary, hath given the Emperor an Account that the Muscovites had gained a Victory over the Swedes, and had taken the Town of Neufchlos in Finland, by which means that whole Province was now under Subjection to the Czar."

Hampuri 21.9. (London Gazette 18.9.1714): "Letters from Revel bring an account, that the Muscovite Fleet had set sail from thence towards the Coasts of Finland, without waiting for the Reinforcement of eight Men of War, which were to join them from Copenhagen." 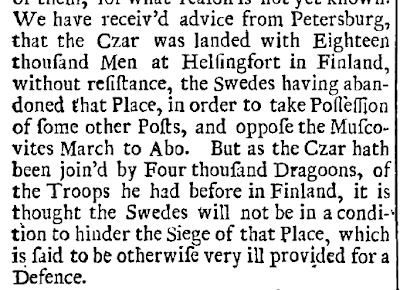